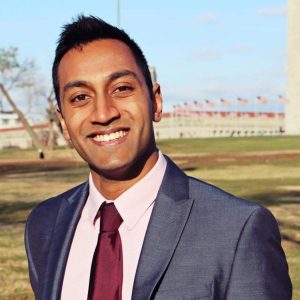 I am a graduate student studying comparative politics. My interests broadly lie with the use of formal theory and causal inference to study how social identities impact Indonesian institutions and elections, as well as immigrant diasporas in the United States.

I received the SEASSI Scholarship from the University of Wisconsin-Madison (2017), the Critical Language Scholarship (2018), the Trice Graduate Research Award (2018), and the Foreign Language and Area Studies Fellowship (2018-2019). I graduated cum laude from Williams College with a B.A. in Mathematics in 2015. Prior to studying in Madison, I consulted with the federal government on IRS, DOC, and AFCLC projects in Washington, D.C.
In my spare time, I enjoy freelance writing. I’ve written a few times about the nexus of identity, politics, and culture for The Atlantic. My reportage of Nikki Haley’s career became the cover story for the August 2018 issue of The Caravan, one of India’s most respected long-form narrative journalism magazines. I spoke on The Partially Examined Life podcast about the religious philosophy and socio-political implications of The Bhagavad Gita.